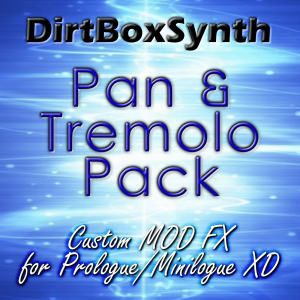 Pan and Tremolo Pack
£4.99
Go to the store page
Tweet

Both effects use Depth and Speed as you might expect, with the exception that the Depth knob is divided into two halves.

The first half of the knob selects a sine-wave LFO, varying in depth from zero to full. Beyond the mid-way point, the LFO changes to a square-wave, and the depth starts from zero again.

Using a square wave on the tremolo will produce a regular gating effect. However, this cannot sync to BPM and is under manual control only.