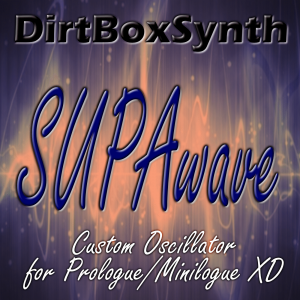 DirtBoxSynth SUPAwave is a 7-voice per note oscillator that incorporates the classic note ‘spread’ effect that creates rich, thick, de-tuned sounds that are great for huge pad and leads.

As well as the classic ‘super variety’ saw wave , SupaWave can ‘spread’ other waveforms including square and also pairs of waveforms that can be swept or modulated for PWM/Phasing-type effects between the two half-waves. SUPAwave also throws an extra LFO and distortion into the mix for added colour and movement.

When in advanced modes, the SHAPE control no longer controls the amount of ‘spread’, but changes the point in the waveform cycle at which the second wave is heard. By sweeping the Shape control (or applying LFO modulation via either LFO), the Width of one wave relative to the other is varied to allow PWM-type changes that tend to create phase sweeps when the detuned voices are louder, and are more like classic PWM when the voices are less detuned or mixed down. In advanced modes, the Spread amount can still be accessed via the menu parameters. Randomness of the initial voice phases can be set using Shift_Shape.

The basic and advanced waveforms / modes are selected with P2 as follows: